Hackers Can Hack Your Phone Password With Sensor Data: Hackers are everywhere, each and every day we see hackers carrying out different kind of attacks to do evil things. In this digital world, nothing is safe and fully secure. If you just thought that setting up a password unlock on your smartphone is the best thing to avoid hackers, then you need to read this news.

Recent research reports that data that are transmitted from your phone sensors can actually reveal passwords or PINs to hackers. With that data, hackers can unlock your mobile device. Security researchers from Germany and Singapore collaborated to figure out a new way to hack passwords on your smartphones.

Security researchers from the Nanyang Technological University of Singapore claim that gyroscope and proximity sensors on smartphones represent a potential security vulnerability.

Researchers have used the machine learning algorithms with the combination of data gathered from six different sensors in smartphones to unlock Android phones with 99.5% accuracy in just three tries. 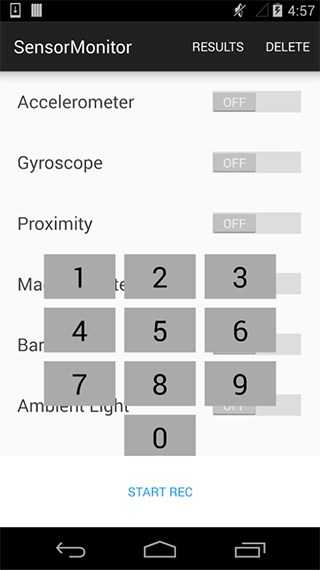 Researchers have created an Android app which successfully collected sensor data from the device. The app used an accelerometer, ambient light sensor, gyroscope, rotation sensor, barometer and magnetometer to collect information every time they entered a Password on their device.

The entire experiment was actually based on an assumption that while entering passwords on our devices, our taps and hand movements changes from the number to number. The sensors present on our smartphone capture the changes each and every time we tap a number.

The group of researchers has also created an algorithm that figures out which numbers are most likely to have been tapped for a certain set of sensor values. So, this is something which is really very scary. For more details on the research, read out the Cryptology ePrint Archive.