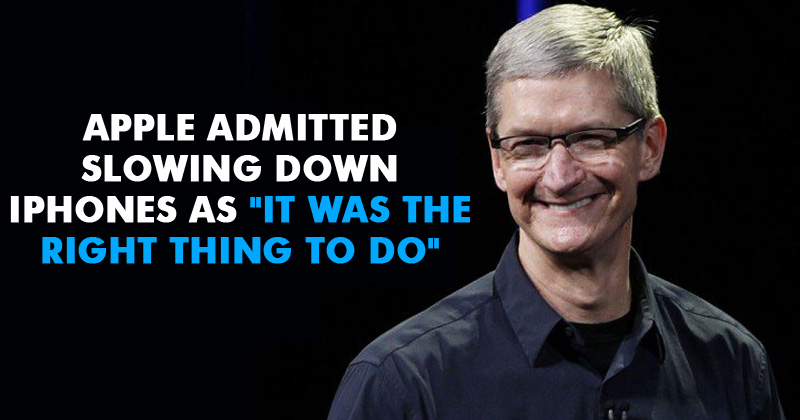 Apple Admitted Slowing Down iPhones As “It Was The Right Thing To Do”: In December 2017, we have shared a news in which we have discussed why older iPhones slow down. The tech giant Apple has openly admitted that they have applied special mechanisms in iOS that restricts iPhone’s performance to avoid any type of battery issues.

The company pushed an iOS update that limits the processor of the devices in order to reduce high battery consumptions. However, the decision doesn’t settle for good, many users have considered this step as a rude act.

As users are getting an option to replace their old batteries that could reduce the number of upgrades and thus lead to slower iPhone sales. Tim Cook said that they never thought of this while launching the battery replacement program.

Tim Cook Said “We did not consider what the battery program would do for upgrade rates. Sitting here now, I don’t know how it will impact upgrades. We did it because we saw it as the right thing to do for our customers. The effect on upgrades was not in our thought process in deciding what to do,”

“The way I look at this, generally what we see with iPhone is that the reliability of iPhone is fantastic. The previously owned market has expanded in units over the years and you see carriers and retailers having very vibrant programs around trading iPhones in because iPhone has the largest residual rate on it”

Right now Apple is under investigation for planned obsolescence in several markets. The US Government has also launched a probe to find out if Apple violated any rules with its power management system.