HMD Global, the Finnish smartphone manufacturer with the marketing rights of the Nokia brand, has used the prelude to MWC 2018 to present its new models for this year, offering a varied range of devices and the return of a signature classic.

HMD Global has done it again. If in the last edition of the Mobile World Congress we were all surprised with the reissue of the Nokia 3310, this year the nostalgic appeal of the Finns has re-emerged, but with another of the company’s flagship mobile phones: the Nokia 8110.

This new version of the smartphone that knew how to have its glory days in 1996, comes with the intention of offering another new proposal for consumers looking for low-end terminals, but with great autonomy and basic functions. 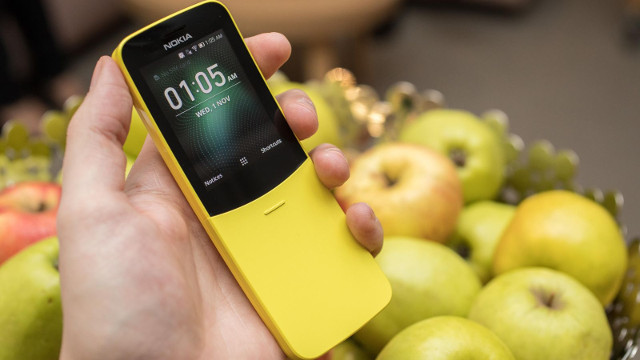 The Nokia 8110 4G Reloaded is a model that has the 4G wireless technology, pre-installed Google apps (Google Assistant, Google Maps, Google searches, etc.) and a battery with a great autonomy of use.

As for its design, it will revive the layout of the physical keyboard, which is available after moving its lid. It will arrive with two colours: black and yellow.

And, regarding its most important specifications, it will have 512 GB of RAM, 4GB of internal storage, 2-megapixel camera, 4G connectivity, Wi-Fi, GPS, FM Radio and a 1,500 mAh battery. Finally, it will be available in the month of May at a price of $79.

Obviously, the goal of HMD Global is to position Nokia in each of the business segments of the mobile telephony market. So far, there are many variants available, but now, with the Nokia 1, it reaches the heart of low-end phones with a more than an interesting proposal.

The Nokia 1 is the bet of the Finnish to access emerging markets with an economic model, but with more than interesting specifications: a Qualcomm Snapdragon 212 processor, 1GB of RAM, 8GB of internal storage, 5MP rear camera with LED flash , front camera with 2MP, IPS screen and Android Go as a mobile operating system. 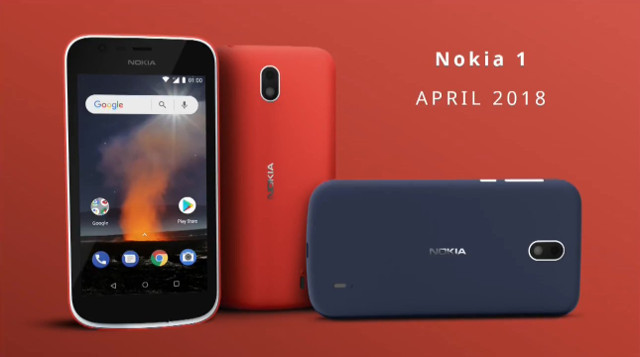 This is, without a doubt, the hook feature for consumers, because Android Go will allow the smartphone not only to maintain a better update policy, but also to have Google apps designed specifically to offer better performance on computers with limited specifications.

The Nokia 1 will be available in stores from April at a price of 85 dollars, so that – surely – there will be several consumers who will look at this new proposal from the Finnish manufacturer.

It really has been a real cataract of presentations of HMD Global in the runway of MWC 2018. To the models mentioned above, there is also the launch of a new version of Nokia 6, which comes with significant improvements and a great price.

If there is a segment that Nokia is exploiting very well is the mid-range. And, for that reason, it has renewed and improved its proposals for this market segment. The Nokia 6 (2018) is a true example of this, constituting a great proposal for consumers of this range of smartphones. 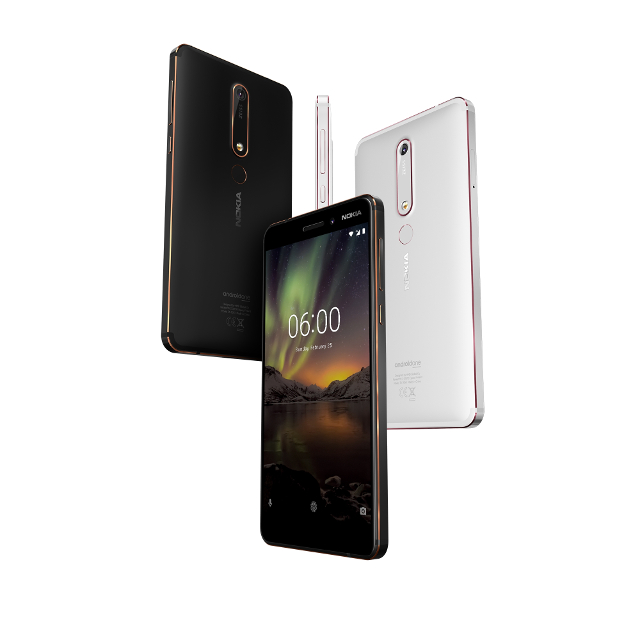 This model will be available from the month of April, in the colours black, white and blue, and at a price of $280.

Nokia 7 Plus: features, specifications and price

The presentation of HMD Global has had two great surprises, being the official presentation of the Nokia 7 Plus one of them. The new exponent for the high-range of the company is really a great proposal.

Following the direction was taken by its predecessor, the Nokia 7, the Plus version of the Nokia smartphone comes as a true evolution, which achieves thanks to more than important specifications.

For example, an attractive design, thanks to its body made of ceramic and with edges covered in copper for better protection of the terminal. In addition, its back is made of glass, which gives it a significant appeal and its 6-inch full HD LCD screen and 18:9 ratio makes it more beautiful.

Regarding its performance, the Nokia 7 Plus comes with a Qualcomm Snapdragon 660 processor, 4 GB or 6 GB of RAM, 64 GB of internal storage and a battery of 3,450 mAh, ensuring a true fluidity in its processing capacity.

But one of the strengths of this terminal is that this version will be part of the Android One program, which allows you to have the latest version of the operating system developed by Google, in this case, Android 8.0 Oreo. 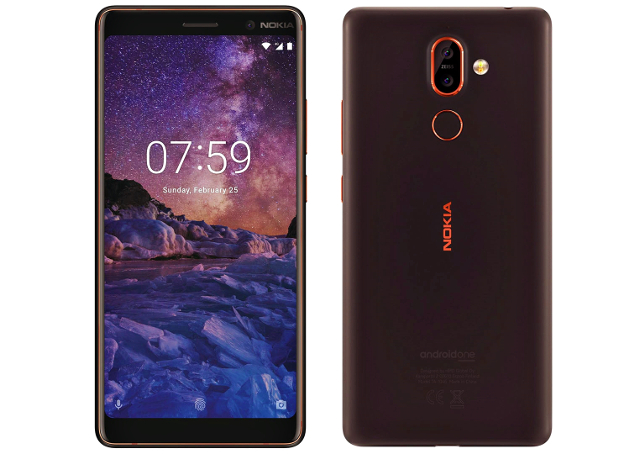 Another great detail to highlight is its photographic section because HMD Global returns to its alliance with the German manufacturer Carl Zeiss to mount the Nokia 7 Plus a dual camera with 16 and 12-megapixel sensors and a focal aperture f/1.7, along with 2x optical zoom and Bokeh effect.

As for its front camera, the sensor will be 16-megapixels and will have a focal aperture of f/1.7, allowing a good resolution in selfies even in low light situations. In the same way, this camera will allow recording videos in full HD (1080p).

Finally, this new exponent of the high average range of HMD Global will be available from April at a price of $399, so – with this price and these features – the Nokia 7 Plus will get a very important reception from the fans of the Finnish brand.

Nokia 8 Sirocco, the new top of Finnish range and the first with Android One

The new Finnish “flagship” has a name: Nokia 8 Sirocco. This new HMD Global smartphone for the high range is an evolutionary leap in the models presented until now.

With a design worthy of a high-end: a stainless steel body surrounded by two panels of Gorilla Glass 5 3D curved glass, and a 5.5-inch screen with P-OLED QuadHD+ technology, reduced frames and IP67 protection.

On the other hand, as a smartphone in this category not only needs a good design, its technical specifications are in tune with the demand of the most demanding consumers: a Qualcomm Snapdragon 835 Octa-core processor, 6GB of RAM and 128GB of internal storage. 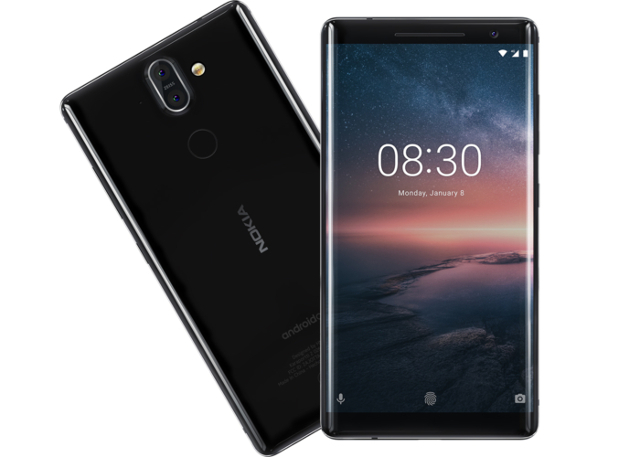 In addition, the Nokia 8 Sirocco is the first “flagship” of the Finnish company that is included in the Android One program, offering Android 8.0 Oreo as the first distribution, but taking into account that thanks to this system, the policy of updates will be much more fluid.

And, as for the photographic section, of course, it does not disappoint either: it offers a double rear camera with two sensors: one of the 12-megapixels with a focal aperture of f/1.75 and another of 13-megapixels with aperture f/2.6 and optical zoom, both signed by the German Carl Zeiss.

Nokia also includes, as it is highlighted in Engadget, a manual Pro Camera mode to take advantage of that system without automatic adjustments. On the front, we have a 5-megapixel sensor with aperture f/2.0 for selfies.

Finally, in terms of its autonomy, the Nokia 8 Sirocco or will reach consumers with a battery of 3260mAh with QuickCharge 4.0 support, which will surely offer more than a day. In addition, thanks to the glass backside, the device supports wireless charging under the Qi standard.

As for the audio, we found a single speaker with an intelligent amplifier. And, in addition, it will not have the 3.5 mm jack, although Nokia does not forget to include a USB-C type adapter for headphones, including OZO Audio technology.

This new flagship smartphone of HMD Global will be available from the beginning of April and at a price of $749, so we will be attentive to its availability to offer a better analysis of a model that promises to give us very good impressions.

So, what do you think about this? Simply share all your thoughts in the comment section below. 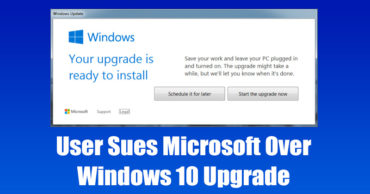 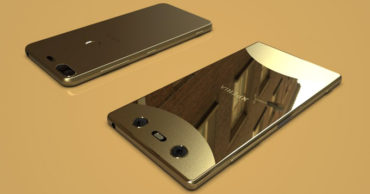 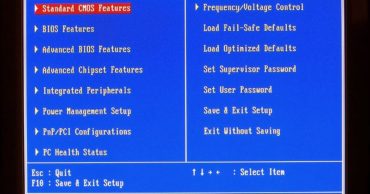