Meet The World’s First Smartphone With A Huge 16000mAh Battery

If autonomy is one of the aspects that you value most when selecting a smartphone, you will be happy to know the Energizer Power Max P16K Pro, the cell phone with the highest battery in the world.

It is the new terminal that Energizer, a brand specialized in resistant devices with great autonomy, has announced at the Mobile World Congress in Barcelona. This smartphone boasts a monstrous 16000 mAh battery, which is by far the most powerful in the world.

The Power Max P16K Pro has an IPS screen of 5.99 inches, with an aspect ratio of 18:9 and a resolution of 1080×2160 pixels. How could it be otherwise, the great capacity of the battery has taken its toll on what weight and dimensions are concerned: it has a thickness of about 15mm and a weight of about 350gm.

The smartphone with the world’s largest battery mounts a MediaTek Helio P25 mid-range chipset with an eight-core CPU which is clocked at 2.5 GHz and Mali-G71 MP2 GPU, accompanied by 6GB of RAM and 128GB of internal storage, while the operating system is Android 8.0 Oreo.

In the photographic section, we find four cameras, two main and two fronts. The dual rear camera system consists of two 13 and 16 MP sensors with dual LED flash, while in the front we have a 5 MP camera and another 13 MP for selfies. The equipment is completed with a fingerprint reader and a 3.5 mm headphone jack.

Taking into account the large capacity of the battery, this smartphone would be especially attractive to load other devices, but GSM Arena says that, unfortunately, the brand has confirmed that it cannot be used for this purpose. Of course, the good thing is that the battery gets fully charged in about 90 minutes.

What Energizer has brought to MWC 2018 is a demonstration unit and it is not yet known when it will reach the market, so we will have to wait to know the release date and the price of the most battery-powered mobile phone in the world.

So, what do you think about this smartphone? Simply share all your views and thoughts in the comment section below. 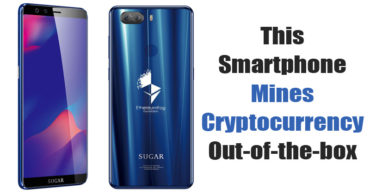