A complete panel, with no more frames than a corner for the camera. This is the filtered design that we have seen of the Xiaomi Mi MIX 2s, the revision of the high range of 2017 that would come with the Xiaomi Mi 7. And also with 8GB of RAM and fingerprint reader under the screen.

Started precisely by the Xiaomi Mi MIX in 2016, the fashion/trend of the screen without frames has become less than two years in a design element virtually mandatory for all manufacturers.

No more frames up and down that encased the screen, today the panel has to stand out even more and occupy the entire front surface if possible. During 2017 we saw models that almost achieved it, such as the Xiaomi Mi MIX 2, but according to the leaks of all the phones that are about to come out in 2018, it is clear that this year we will seek to reach 100% of surface area.

The design filtered today of the Xiaomi Mi Mix 2s aims to go even further. Shown by the expert @Slashleaks filtering account, this is a Bezel-less design with a ‘unibody’ curved ceramic design in one piece where we do not see practically any frames, just the handset on the top edge and a small notch in the upper right corner to house the camera, an element like the notch of the iPhone X but much more disguised.

The rear is equally clear, hosting only a Dual camera in a vertical configuration and the LED flash just below. Without a fingerprint reader? No, because the filtered scheme indicates that the Mi Mix 2s will have a front-end reader, only that located under its screen, a recent technology released by the Chinese brand Vivo and that we will see mounted on this year’s smartphones without a doubt. 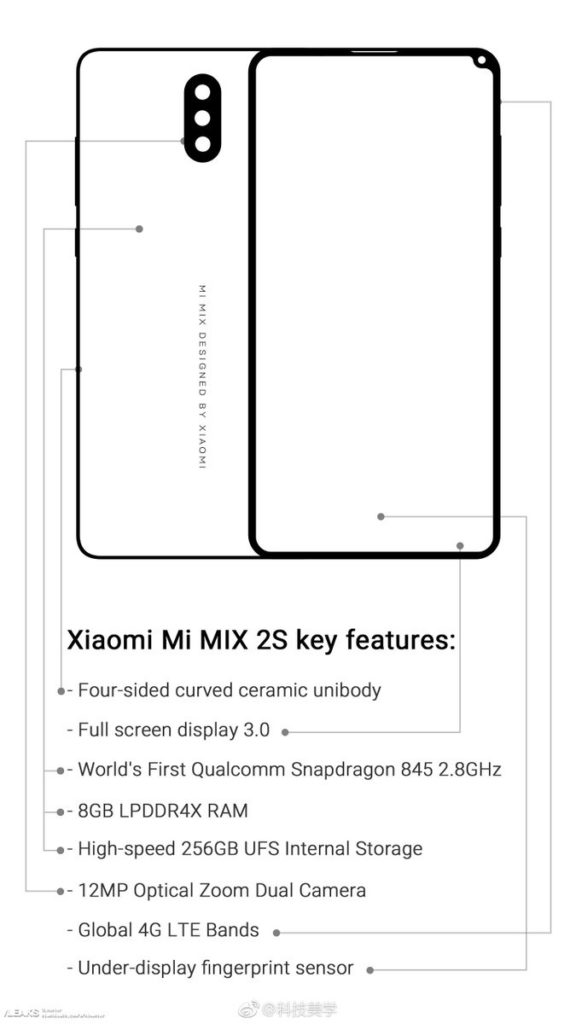 Other elements that the image points are the presence of a ‘Full-screen display 3.0’ screen, which would mark the third generation of the complete screens of the series after the views in the Mi Mix and Mi Mix 2. It also seems that it will come with 8 GB of RAM, 256GB of internal storage space and a Dual 12-Megapixel camera. But the most interesting is without a doubt the processor.

The first mobile on the market with Snapdragon 845

Although in theory the honor of being the first model on the street with the new Qualcomm Snapdragon 845 processor will fall on the Samsung Galaxy S9, if it is true that the Mi Mix 2s will hit the market before the Mobile World Congress 2018 (on 26 February), will become the first smartphone that goes on sale with Snapdragon 845 processor. Of course, this third Mi Mix could be one of the most spectacular terminals of the year in terms of design.

So, what do you think about this new design? Simply share all your thoughts and opinions in the comment section below.