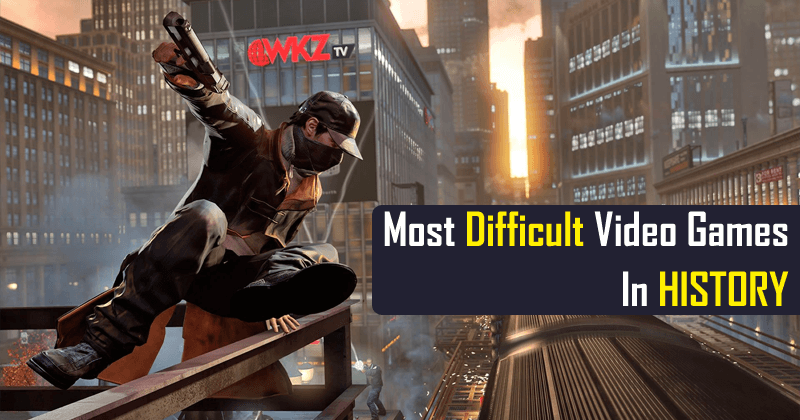 Here’s The List Of Most Difficult Video Games In HISTORY

Are you a player? , A true addict of video game consoles? Surely regardless of the command to which you have hooked, whether they are Nintendo, PlayStation or Xbox.

Video games are an incredible way to spend hours living adventures that exceed the limits of imagination. From spooky experiences in lurid scenarios to fun stories in heavenly places. More than once, we have had to abandon the game by being unable to overcome certain riddles or defeat certain enemies.

It is a challenge to face difficult video games, but the feeling of overcoming them is simply unique.

Who has not been in trouble? : boys and girls, young and not so young, we have suffered despair in front of the television or the screen playing those video games that have made us enjoy. But we have also suffered high doses of despair, unable to advance trying to solve a puzzle or unable to pass to that monster at the end of level.

We present a list with seven video games that we have considered the most difficult to overcome.

Well, it may not be the hardest in history, but it’s a must-have for graphic adventure fans. Who was not in trouble to escape a burning room or get a stinking trader to give him the information he needed to keep moving?

The second part of the delivery allowed us to travel to Paris, London, Central America or the Caribbean at a time when low-cost flights were not yet the norm. When in 1997 we had to get George and Nicole to surpass their goals, recess was the best time to talk with friends about how to get out of this or that one.

With this title, we spent great moments and we were able to hook to the boom of the graphic adventures with other titles like The Legend of Monkey Island, Runaway: A road adventure or Hollywood Monsters. Great classics of the genre. We challenge you to check which video game you find more complicated to overcome.

The games of spaceships were always addictive. In 2001, Ikaruga arrived for Nintendo Game Cube and Sega’s Dreamcast. But above all, it came to despair. Its vertiginous rhythm and peculiar game system generated more of an epileptic attack.

Ikaruga is one of the most difficult video games that one can throw in the face. You have to have almost superhuman abilities to be able to control all opponents that cross the screen in a maelstrom of red and blue lights. An experience that for some even could be traumatic.

A video game that required concentration and skill, but above all, reflexes. Rays of colors that traveled the screen absorbed by our ship and by the enemy at a spasmatic speed. Haven’t you become color blind?

The creator of Dark Souls’ two installments, Hidekata Miyazaki, and something more current than others on the list, Bloodborne is in fifth place, but it’s not easy at all. Experiences to the limit and endless patience to overcome this video game in key role and extreme action that will get you out of your boxes.

One of the most difficult video games in history that offer really creepy sights, as well as its difficulty.

Do not despair, certainly the great variety of weapons offered combined with those suggestive scenarios that we talked about. All this wrapped in a fantastic world of darkness will make you spend hours fighting the many monsters and enemies that inhabit this romantic world of death.

Sorry to not extend much more, but the comments of our friends of Hobbyconsolas on Darksouls deserve our respect and our silence.

You may find others more complicated, but Darksouls is certainly a really difficult video game. Staying alive is almost epic. A feat that few can boast (at least for more than five minutes in a row). It is not worth hiding in a corner or running away from the enemy. Anyway, you could also fall into an abyss.

Another classic. In this case the most complicated version of the already difficult of the famous saga Ghosts’n Goblins. In this video game of Super Nintendo (1991), the already mythical Sir Arthur, made us put on the armor to fight in a medieval world that left us literally in calzones when we were hit a blow.

An adventure that besides being nostalgic, can be legendary. Like not remembering those fantastic end-of-level monsters. Some of us miss their pixelated textures and that side scrolling. A look at the past that is not without difficulty.

Super Mario Bros: The Lost Levels became more than just a video game. The friendly plumber with mustache who stars him is already an icon of popular culture. The Japanese sequel to Super Mario Bros was so complicated that it came to the simplified foreign market, not to say totally reformed (except for its characters).

Who said Nintendo only generates fun and gameplay? The difficult games are also part of their particular stamp, and Super Mario Bros: The Lost Levels is proof of this.

An almost identical copy of its predecessor but with a much greater level of difficulty and a requirement in almost millimetric jumps.

Here it is, it’s here! Traditionally regarded as the most difficult video game ever, Battletoads offers fast-paced racing and mutant enemies. The title that consecrated to the NES in its last snatches and put to Nintendo at the top of the hand of Rare.

Few can boast of having completely outplayed the game. Undoubtedly the most difficult video game in history for many at a time when Ninja Turtles were in fashion and we all wanted to talk to a giant rat under the sewers.

It had to be very good not to receive from all sides (even the supposed “friendly fire” of our fellow fatigue at the controls we had life). If you want to boast of having played a difficult video game, Battletoads is a real challenge.