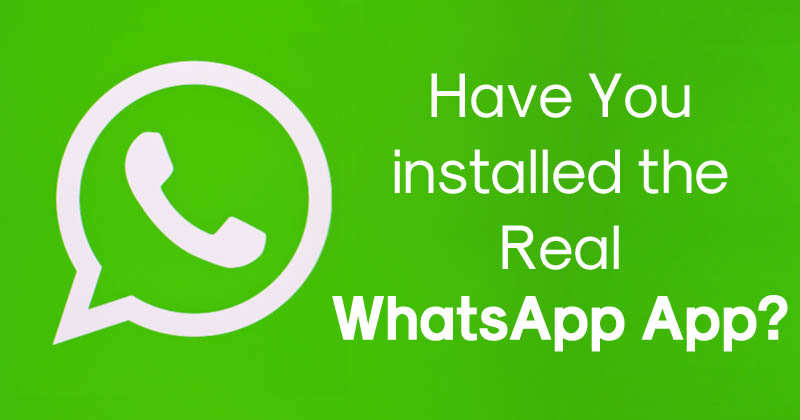 Have You installed the Real WhatsApp App? Fake App Over 1 million downloads Found On Play Store

Have You installed the Real WhatsApp App? Fake App Over 1 million downloads Found On Play Store: If we talk about the Android’s strengths, there are many, the significant one is the freedom to publish apps on Google Play. However, the same freedom can be seen as a negative point. Recently, an application called “Update WhatsApp” published by a developer called “WhatsApp Inc.” installed by at least 1 million people.

How To Hide WhatsApp Images & Videos From Your Phone’s Gallery

As you might suspect, this is not the real WhatsApp application, but something that tries to fool users into the Google store by replicating both the app name and the developer name. It is also worth noting that the creators of the fake app masked the title of the “company” as “WhatsApp Inc.”

However, the developer has now changed its name to “Dual Whatsweb Update” and switched the icon, which doesn’t look like the WhatsApp icon anymore.

The fake app was exposed by Reddit users and made it public, forcing the developer to move and rename the application. The application went from “Update WhatsApp Messenger” to “Dual Whatsweb Update” and the developer name changed to “Live Update Apps”. However, Google seems to have acted and now the app is inaccessible.

Once installed, the application tries to hide on the phone without displaying a title and displaying a blank icon. It is also able to download a second unknown APK over the internet.

5 Reasons Why Google Allo Is Better Than WhatsApp

That said, the damage that the app causes could be greater. The fake app was meant to generate revenue for its developers through advertising and does not seem to try to steal information to defraud its victims. Usually, people who fall into this kind of blow end up having a much more complex outcome.