Although large companies have great power and solvency in solving their computer vulnerabilities, it is never enough to be completely safe. The tech giant Google knows this, and that is why for a long time now it has been launching offers for independent developers that can find vulnerabilities in the system.

The tech giant Google is a company that distributes a large amount of software. Among many, we find Android as the main ecosystem, but other points such as the search engine, web pages or just some of the official applications of the store, are the reason for the company to provide a large reward to the user who manages to break their security.

These were the best rewards of 2017

With a past year full of good news in terms of news in software but with many other bad and influential news related to the same, the tech giant Google has developed a kind of ranking in which we can see how it has distributed these awards based on the vulnerabilities found. 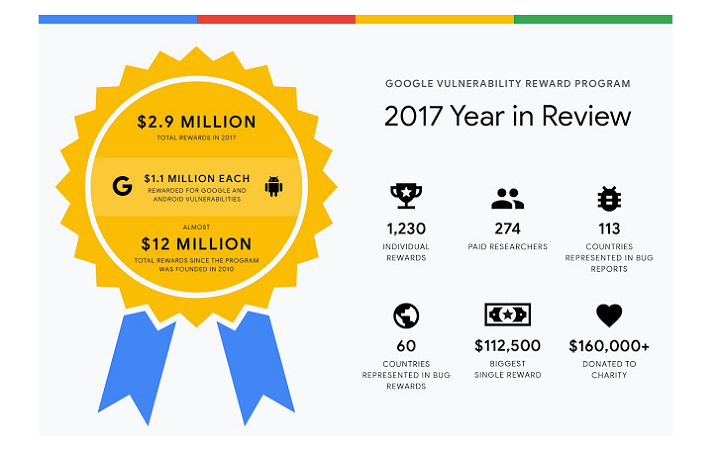 It is clear from the official publication, directly, that during the whole year of 2017 Google paid in rewards 2.9 million dollars to a total of 274 researchers from 60 different countries for 1,230 discovered security failures. Some really important figures that give us a reference of the amount of work behind and how big a field is like security for a company as powerful as Google.

Among those 2.9 million of which we speak to you, more than 1 million were due to security failures in the company’s own products (mainly applications). 1.1 million dollars in the Android operating system and the rest in Chrome and Chrome OS vulnerabilities. Some 160,000 dollars were donated to charities of the whole group.

Among all the researchers who won those almost 3 million dollars, Guang Gong was the one that took the biggest prize. Nothing more and nothing less than $112,500 went into his checking account after knowing that Chrome had a vulnerability in the Google Pixels that could get information from the device and the user.

Without a doubt, the numbers speak for themselves. On the one hand, we find a smart but honest security policy from Google, which offers a reward for users who find vulnerabilities in the system. On the other hand, we can see how, despite the intense work on the part of the developers of the firm, every day that passes adds to the queue new failures that must be corrected.

So, what do you think about this rewards? Simply share all your thoughts and opinions in the comment section below.